Some years ago Rick and Maria put on a Zentangle event called a 'Master Class'. I wasn't able to go. But I decided that if they ever planned something similar I really had to try to attend. ZenAgain happened this November!

Shortly after the event was announced a crazy scheme occurred to me. I wanted to take something, something personal, a little gift, to each of the attendees and the Zentangle staff.

Bookmarks! I often make bookmarks out of bits of nice leftover paper or artwork that I've decided isn't going anywhere happy. Each one would be a unique piece, an original artwork. I had perhaps a dozen already, and wondered how many I'd need in total. I asked. My jaw dropped. I picked it up and said to myself, "I have time. I can do that!"

Among the final collection is a number of monotangle bookmarks including Crusade, Ginili, Knightsbridge, Lamar, Umble, Skye, Schway, and Zenith. 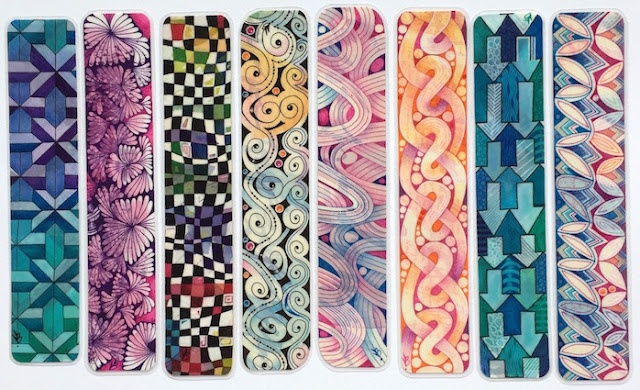 This was a perfect opportunity to slice up some almost finished - or even finished - artwork that was sitting in a drawer wondering how to make itself useful. I had quite a few pieces like that. One was a mandala on 16" mat board. I peeled off most of the backing to make them thin enough. Here it is, reassembled after becoming bookmarks. In most cases I added details to what was already there; everything outside the large ring of small triangles was added after being cut into bookmark strips. There were a few blank beige ones left that I haven't included here. 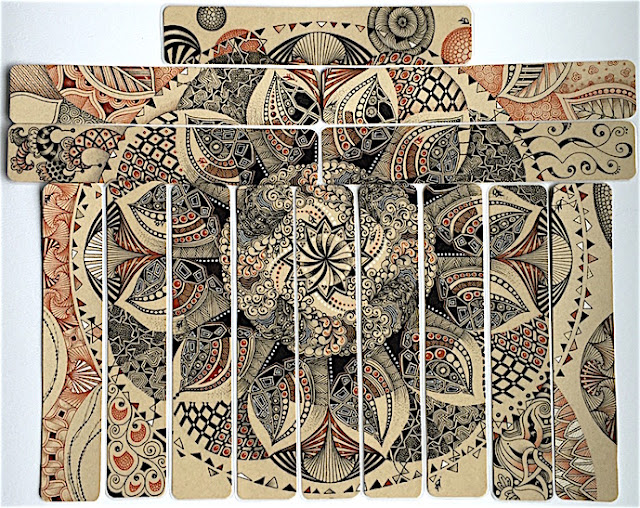 There are some that are rather unusual. One has funky chess pieces. Several have house parts: windows, roofs, and doors. Several have holographic strips. One has a rainbow ribbon. Some have washi tape. One is iris flowers and one has zentangle tiles in the background. Two have some handwriting. A few are parts of a landscape. Others (not shown) have decorative holes or unevenly trimmed edges. 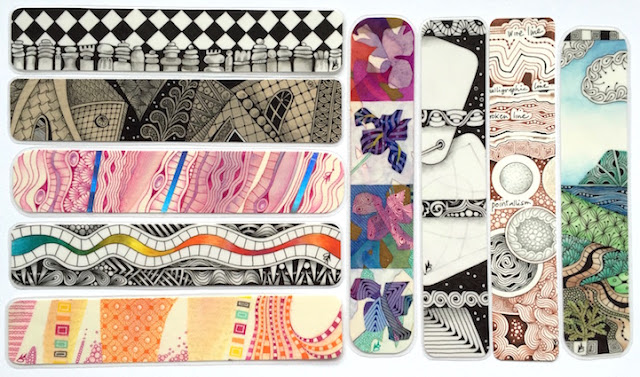 I took photos in groups as they got laminated and finished. The final tally is 334 bookmarks. In future posts I'll show you all of them.
Posted by Margaret Bremner, Artist at 1:55 PM