I almost never, never use people as subject matter. However, I kept seeing a face in the upper corner of this eco-dyed paper and decided I'd best let it happen. Maybe it's a whisper of inspiration.
The eyes took three attempts before I was happy with them. At one point I very carefully cut the paper with an x-acto knife and peeled off the top layer so I could start fresh in some places.

I liked it, but it didn't quite seem like stand-alone artwork. A lot of my work has an illustrative quality to it, as if there's a story behind it somewhere, but this one particularly felt that way.

There was another whisper of inspiration... it could BE an illustration, one of two pages, the other of which is text. I could use one of the eco-dyed papers that had no appealing leaf prints or patterns. They have an 'old page' look to them. Yes!

The hunt was on for the 'text' part of this project. It had to be short enough, pithy, and somehow spiritual. I found something in a book called "Tablets of 'Abdu'l-Baha". It mentions eyes, about seeing with your own eyes and not accepting everything you're told as all there is to know. Once I was finished I realized that it begins with the letter 'I'. Coincidence? 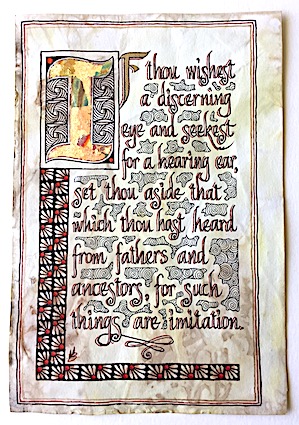 Here is the two-page spread of my new, 'old' manuscript. There's metal leaf on both the initial letter 'I' and one onion dome. There's gold ink elsewhere, and a small red gem at the top of one onion dome. Some of the white dots are pearl-effect 3D ink, but not the ones on the onion dome. 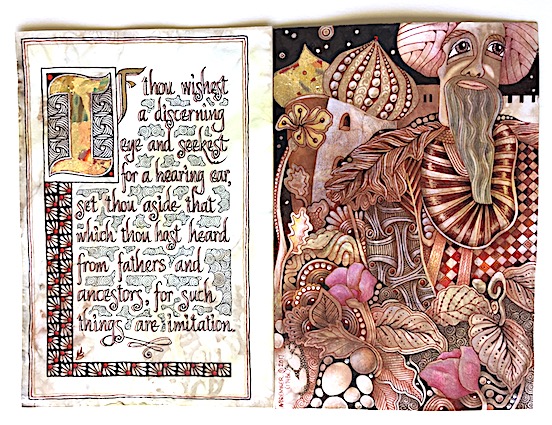 Posted by Margaret Bremner, Artist at 11:15 AM