In my Book: back cover, alphabet, gems, and paisley

This is an 'ideas' book of sorts. I've been including past and current artistic interests as well as things I want to try in more detail at some future point.

I'd been ignoring the back cover. It's on the back, after all; who looks there? But it was becoming a bit grubby and I thought I'd better do something. The large zenAgain stamp was there from November 2016 when I received the book, so I tangled around it. There are three circles with metal leaf. The thin "white" stripe beside Knase is a strip of holographic paper. It sparkles rainbow colors at different angles, which goes with the string of rainbow Pearlz, which may be my favorite part of the whole thing! 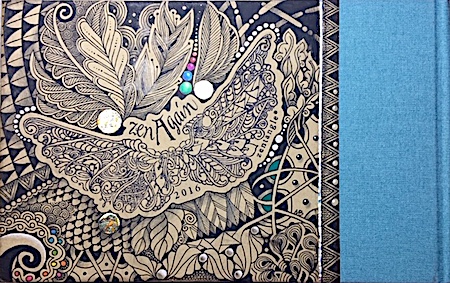 In the past I've done calligraphy and some lettering, so I did a page honoring that art.

On another page I'd done a random, gray wash because I like to have something like that to pique my imagination. It turned into paisley and gems. I'd encountered the tangle Ilac and have liked Paisley Boa since I discovered it, so they became the basis for this page. 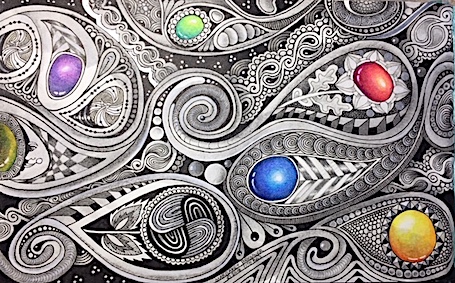