I began this page in my Book with the grid of colored squares, a collage of leftover bits from other work. 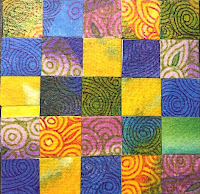 I thought it might become another "space junk" page, but once that grid was in place it seemed to want a square grid all over. I obliged. 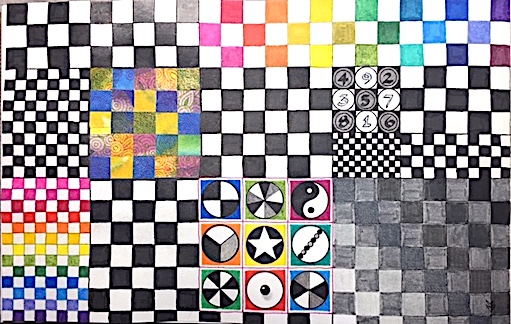 I decided to include a magic square of nine with the numbers are represented by images. That's at the bottom center. Some years ago I did an acrylic painting with this theme (see it next in this post). On this page in my Book I also included a square with the digits.

I'm not happy with streakiness of the grays in the lower right but I wanted to try a gradation where the same gray is the dark gray in the light portion, and the light gray in the dark portion.

MAGIC SQUARE OF NINE PAINTING
During my long mandala phase, I did this acrylic painting of a magic square of nine, except instead of simply writing a number in each square I devised an image to represent the number. The centers of the half-circles at the perimeter are filigree metal pieces.
WHAT IS A MAGIC SQUARE?
A magic square is a grid of numbers such that each horizontal, vertical, and diagonal row results in the same sum. A magic square of nine is one of the simplest, comprising only nine squares. The sum of each row is 15. 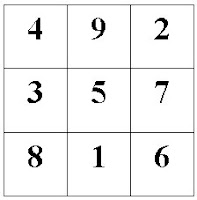 There are more complicated magic squares, larger, with more squares. Here's a magic square of four and the rows add to 34. You can learn more about magic squares on wikipedia here. 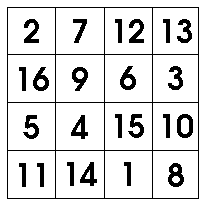 Posted by Margaret Bremner, Artist at 7:00 AM