I often enjoy working on spliced tiles. It's both fun and challenging. With the three colors of zentangle tiles you have three possible combinations.

One of the first places I saw this idea was on Day 9 of the 12 Days of Zentangle 2017. The video is on YouTube here.

You can create a spliced tile...

...with a knife:
...with scissors:
Here's a black and tan one. I used colored pencils (white and various browns) to create a gentle transformation from one color to the other. Several of the central 'seeds' are gold ink.
More black and tan, this time it became houses. I used both black and brown inks, as well as white. 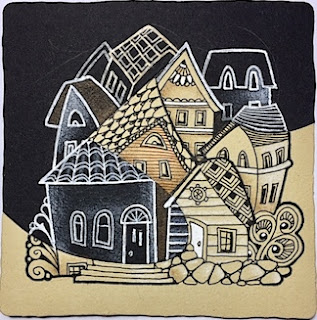 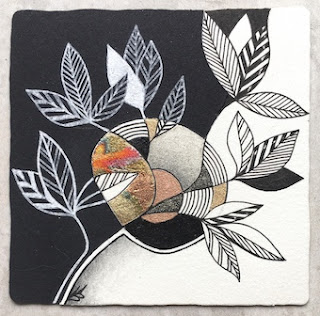 You can bring even more color into the mix if you want! In the tile below I also used metallic inks. 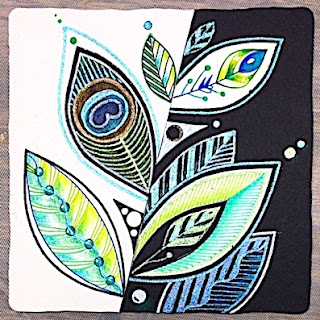 You can see more of this type of work in a post from a while ago about notanicals, a hybrid name I invented to combine notan and botanical imagery.

Oh, those three blank tiles at the top of this post? Here's what became of them:
The black/white tile is in the same position as above. There is a hint of colored pencil, and clear Glaze ink in the center of Dex for more depth.
The white/tan tile is turned 90 degrees counterclockwise from the image at the top. I decided to ignore the color division and do the tangles across both colors.
The black/tan tile is upside down from the tile above. I tangled in black, white, and gold inks and I used brown colored pencil as well as the gray graphite.