You probably noticed that the blog looks a little different today!

I've been feeling the need for a new design and a new banner for some time. When I began this blog in October 2010 - five months after I became a CZT - I thought it would be about  a variety of art topics including Zentangle. It quickly became almost entirely about Zentangle and this was reflected in the original masthead, below.

Zentangle instantly became, and still is, a major part of my artwork, but I'm exploring lots of other avenues, and I want the blog header to reflect that.

Recently I chose fonts and colors to use in all my materials across platforms and updated the blog's fonts and colors a few months ago. Some of those are the turquoises and orange in the new banner. (There's still some fine-tuning required in terms of a font on the blog.)

I started to design a new banner, but wasn't happy with where it was going. My first effort, below, went nowhere. (Well, I think it became ATCs or bookmarks!) 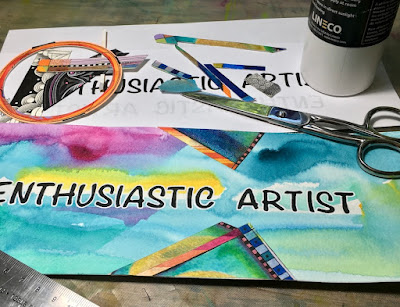 I realized that I also wanted to downplay the "enthusiastic artist" part of it, although I'm definitely still enthusiastic! I liked the photo of a work in progress and the supplies I was using. It struck me that I could show something like that in the header's image, with more artwork, and add my name as the major element.

The blog will still be found at enthusiasticartist.blogspot.com for the foreseeable future.