I'm involved in a collaboration among four artists. The other three are from Queensland (Australia), Labrador (Canada), and Oregon (USA). Each of us has begun four artworks, and has sent one to each of the other three, keeping one for ourselves. Now we'll each complete four pieces.

We decided to do something with leaves from our own area, and I chose the Garry Oak. Before the last ice age, Garry oaks were part of an extensive hardwood forest in British Columbia and points south. Their range was wider during a warm, dry period after glaciation, but it has diminished in the current wet and cool climate. They're interesting to me because the leaves are quite rounded, unlike most other oak leaves.

Below are the four "starts" before I sent them on their journeys. 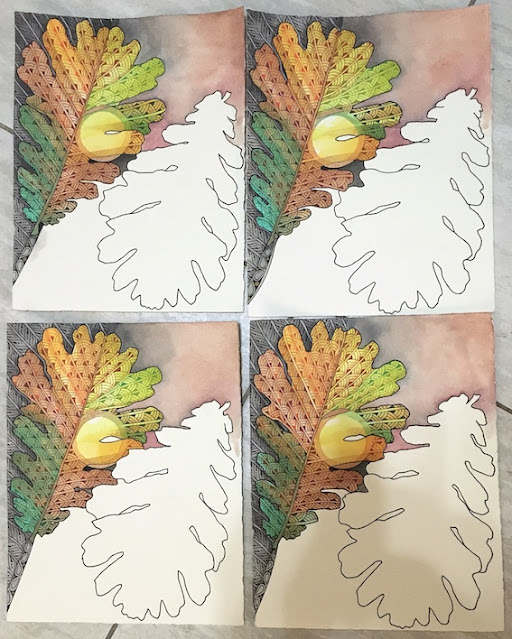 Here's what I received. From Queensland, Maidenhair Fern; from Labrador, Black Spruce; and from Oregon, and a variety of leaves. One is on simple brown craft paper and I'm looking forward to using some fun, non-archival materials on it.

Of course, there will be tangling! More on this project later.
Posted by Margaret Bremner, Artist at 9:00 AM